Have you ever fostered or adopted a little girl or boy?
Well, one day in October 2010, my wife, Eve, had 2 studs, Sammy and Kimbro, and since 2 was not enough she had decided to foster a little girl also. When she was brought home, she was so tiny, about 15 lbs at the most, and just 5 years old. Her name was apparently Minerva but Eve didn't like that name, & re-named her Mimi.
Mimi was overwhelmed since the 2 of them, were running all around trying to catch her. They were just as big, or shall I say as small, as she was. She could not hide from them due to their size similarity. I tried to put my hand out to let her know to come to me if she was being bothered too much. She, however, wasn't ready to come to me and just kept trying to get away from them. I was a little perplexed as to why Mimi would not come to me. Eve told me why she was so apprehensive of me.
It was then, that Eve gave me the terrifying news.
She told me that this precious lil girl was abused and that's why she was fostering her. I could not believe that some monster actually had the audacity to abuse this poor tiny defenseless lil girl. This was no man, in my opinion, he must have been, to say the least, a bully or a little insignificant insecure individual, that needed to pick on those much less than him. Even if he was a lean 150 lbs, that still would have dwarfed poor lil Mimi. If that all wasn't enough, what really topped it off and burned me up inside, was the fact that this inhumane intimidating bully actually locked her up inside his foreclosed home and left her to her impending death.
This was the sign that told me that I just had to adopt her. This was no longer a temporary situation because I could not have this precious Lil girl go into another possible scenario that could be similar. I decided then and there that she would from then on be My Lil Mimi. I adopted her for life.
I must not have made myself clear enough though, because the next day Eve took her back to the adoption agency and was about to be adopted all over again. When I saw she left, I went to the place and took her leash from another guy that was trying to get her adopted, and I made it clear this time that she was to be mine forever! Eve came back and got everything straight with the management. It was a relief that she was finally all mine from then on.
So I and my Lil Mimi were together at last!
For the next month, everything seemed to be going well but unfortunately, Eve and I got into a little spat and she told me to leave. I did not have any place for myself so I was just sleeping in my truck. Unfortunately, my Lil Mimi was still with Eve. I knew that I had to find a place quickly if I was to get Mimi back. I finally found a place that would take not only me but my Lil Mimi. Since Eve knew that 3 of them would be too much for her to handle she eventually gave Mimi back to me.
From that moment forth, we would never part ways again, ever!
After a few months, I met someone else and she and I set up housekeeping together.
One night after coming home from shopping, I was putting items away in a closet and Mimi freaked out!
I could not tell what her problem was, but she had gone into the bathroom and just hid behind the toilet. She was also squealing intermittently. I wasn't even touching her but she kept squealing whenever I came close to her. I thought something was wrong and I didn't know what to do. I wasn't sure if she would make it through the night, so I just got down on the ground with her and did what I could for her. I tried giving her treats and she would not even touch them. Brandy, my lady friend, called an emergency number and it would be $200 just to see her. I decided that if I just watched her and stayed close to her that she would be fine through the night.
7 am arrived and we went straight to the doctor's office. The owner of the practice saw us and tested her and told us that she was not in any physical pain. We were very perplexed about what the problem was then,
because what else could it be?
It was from this moment that I knew she had some psychological problems.
This fucking asshole monster must have really done a number on her!
I could just be there for her and offer her my support and let her heal in time. She had another psychological break just once more and she's been fine ever since thank god!
Well, I guess you must have already figured out by now that my Lil Mimi is not only my daughter but my Lil Chi, which is short for chihuahua. She is long-haired and extremely adorable. For those of you who know the meaning of a dog being your family, I won't have to say another word, but for those who have a hard time seeing animals as family, just imagine if your child was hurt, it's the same feeling for me as Mimi is my daughter. 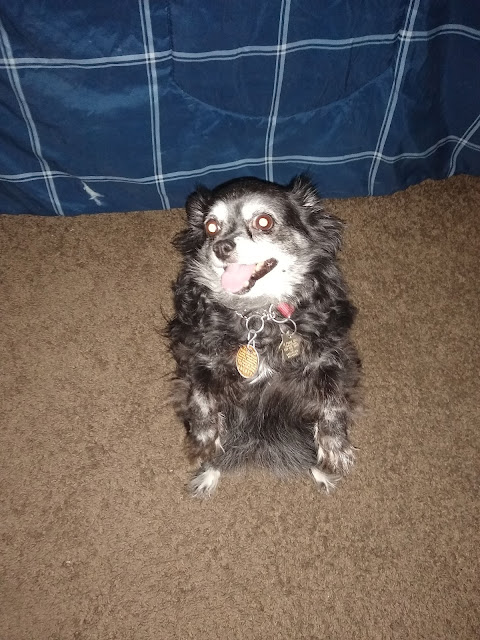 After my experience with My Lil Mimi, I would like to say my piece on animal cruelty.
If I ever see a person (I use that word loosely) abuse or harm an animal-->I will act first, then deal with questions later!
Got it?
Now that you know that she is my Lil chi, let me tell you a little about the breed.
Chis are fiercely loyal and will protect you as if their life depends on it. Every time someone enters she will bark letting me know. Furthermore, even though chis are naturally protective, she is even more so, I feel because she was abused so badly that now since she is with a loving caring master, she does not want to lose me, which makes her even more protective.
Please just allow me to share just one more thing with you; how well behaved and special she is.
I can let her downstairs and she will do her "business" and come back up on her own without me even watching her.
Don't worry, I keep my ears and eyes open for trouble, listening for her barks. She is so well behaved, that she never barks unless there is trouble. She doesn't chase other K9s and she rarely has an "accident" and just follows me around. She is also ok taking a bath.
She will even hop off the bed to go to the floor if I let her up to be with me in bed!
Does your dog behave this well too??